The purpose of this paper is to let our multi-generational, loyal customers know PennGrade 1® Partial Synthetic High-Performance Oil SAE 20W-50 — The Original Green Oil — as well as the entire PennGrade 1 product line is the same product today as it has been for decades.

It is the same unique base oil cut and the specially selected high-zinc, high-phosphorus formulation that’s been known and trusted by high-performance engine builders and vehicle owners for decades.

While the name and look have changed, the performance you have come to know and trust has not. The Original Green Oil is still alive and thriving. And our tests prove it.

With the product’s new name and appearance, various customers, distributors and competitors questioned whether or not there was a change to the PennGrade 1 product.

At the time of the purchase, the agreement between D-A Lubricant and ARG stated ARG would maintain the blending and packaging of the PennGrade 1 family of products for the short-term while D-A was adding the space and capabilities for two new packaging lines at its state-of-the-art facility in Lebanon, Indiana.

When you take on manufacturing the best high-performance racing, classic, vintage, legacy, historic, muscle car and street rod engine oil in the market, you consistently remain a target mainstay for the competition. And when you change the name and look of that iconic, unparalleled engine lubricant, you’re bound to get some pushback. From spring 2017 to fall 2018, rumors were circulating that the D-A product had been changed.

“We have continued to produce the same PennGrade 1 oil product that has been manufactured for the last fifty years,” Noal said. “But if it is in a different bottle and is blended and manufactured in a different facility by a different company, people are likely to blame any performance issue on the oil.”

Finally in the fall of 2018, it was time for D-A Lubricant to take the bull by the horns. They decided to put PennGrade 1 to the test — the most comprehensive wear testing of the product ever — to prove, once and for all, what they already knew.

In November 2018, D-A Lubricant took 75 gallons of PennGrade 1 SAE 20W-50 High-Performance Oil — the most popular oil receiving 95% of the complaints — from an original batch of Brad Penn Oil blended and packaged prior to the acquisition and 75 gallons of the same oil currently being blended in the D-A facility and shipped them off to a nationally-recognized, independent research and development laboratory.

The laboratory evaluates and verifies fuels and lubricants used in air, automotive, rail and water vehicles to meet certification standards.

Four blind-labeled lubricant samples were sent to the laboratory. The samples were the present base oil and finished fluid from today and from the original Brad Penn PennGrade 1 SAE 20W-50 High-Performance Oil.

The laboratory sent a letter stating:

ASTM D7042 is the Standard Test Method for Dynamic Viscosity and Density of Liquids by Stabinger Viscometer (and the Calculation of Kinematic Viscosity). Informally, viscosity is the quantity that describes a fluid’s resistance to flow — the state of being thick or sticky in consistency, due to internal friction. Formally, it’s the ratio of shearing stress to velocity gradient. A high-viscosity liquid doesn’t flow well, and a low-viscosity fluid flows very easily.

According to ASTM International, “the viscosity of many petroleum fuels is important for the estimation of optimum storage, handling and operational conditions. Thus, the accurate determination of viscosity is essential to many product specifications.”

“When we measure the viscosity of a finished fluid in order to determine its grade, we are concerned primarily with the kinematic viscosity,” Noal said. “Generally, a higher viscosity index is better because it gives you a wider operating range, meaning you can safely use the fluid or lubricant at a wider range of temperatures.”

The four samples provided by D-A Lubricant are labeled as follows:

Most important to compare are the two samples labeled HP-18-55 and HP-18-56 — these are the two finished fluids of PennGrade 1 oil from the original Brad Penn product and D-A Lubricant, respectively.

“In practical terms, there’s hardly any variance between the two samples,” Noal said. “Technically, the D-A sample is slightly more viscous, meaning it’s slightly heavier and has more internal resistance to flow, which is a good thing.”

“Overall, this test shows the samples are virtually identical,” Noal said. “We wanted this to be as valid a test as possible, so we pulled the samples from batches of the oil that were already manufactured and labeled — the actual PennGrade 1 product customers are using. We didn’t blend a specific sample for the specific purpose of testing it. We wanted to be as truthful and transparent as possible with these tests, and we believe this has proven the two samples to be the same.”

The Block on Ring (BOR) friction test is designed to perform a load-bearing test of lubricant oil and measurement of metal-to-metal friction coefficient. In the tests by the laboratory, all formulations were tested for friction and wear in the Falex instruments BOR. The test profile used was the JASO M358 standard method.

“This test is essentially a cylinder of metal put on a flat metal surface with oil in between, and then it’s spun around with something heavy on it,” Noal said. “Here we wanted to simulate what kind of contact and wear a flat tappet camshaft in a classic car, high-performance vehicle engine would experience.”

Also known as the “oiliness friction tester,” the BOR test evaluates pressure resistance and durability of lubricants and lubricity of metal materials. According to an evaluation prepared by Nanovea, “Sliding wear often involves complex wear mechanisms taking place at the contact surface, such as adhesion wear, two-body abrasion, three-body abrasion and fatigue wear. The wear behavior of materials is significantly influenced by the work environment, such as normal loading, speed, corrosion and lubrication. The BOR test is a widely-used technique that evaluates the sliding wear behaviors of materials in different simulated conditions.” 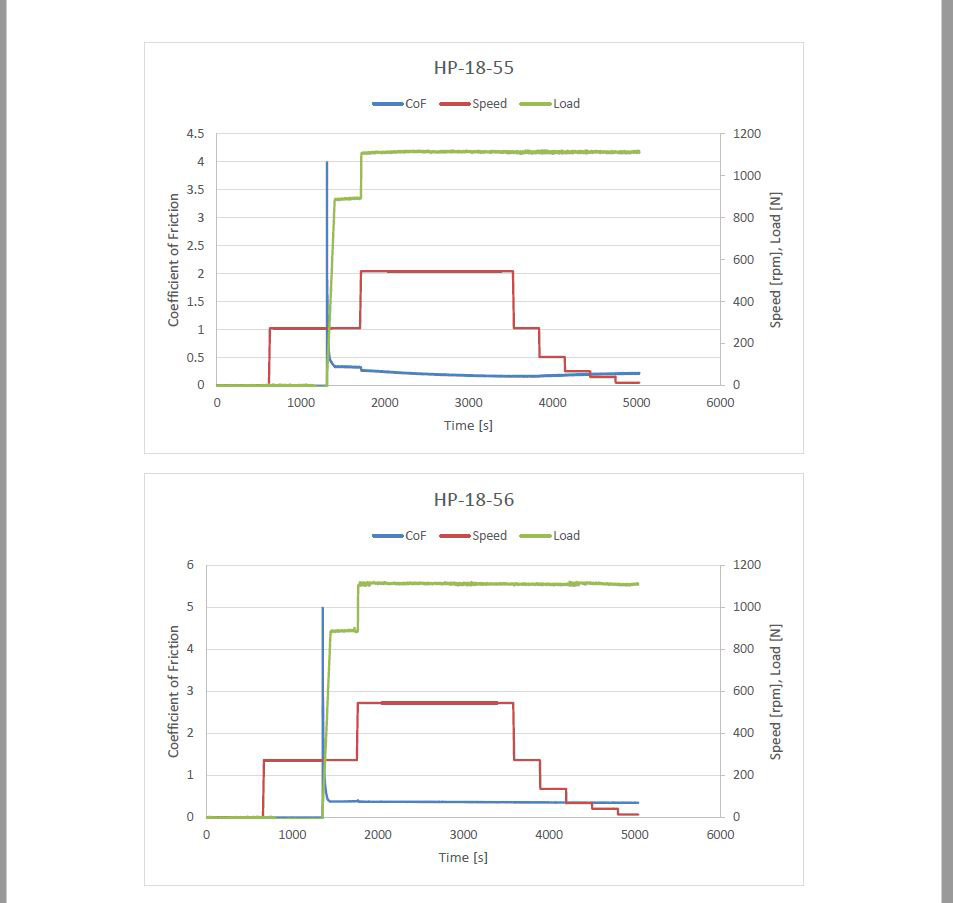 “A test block is loaded against a test ring with a known force,” said the Nanovea report. “As the ring rotates at a given speed, the resulting frictional force between the block and the ring is continuously measured during the test with a load cell. Wear rate values for both the block and ring are calculated from the volume of material lost during a specific friction run.”

When comparing samples HP-18-55 and HP-18-56, the samples are nearly identical in measurements of coefficient of friction (CoF), speed and load.

“The interpretation on this test is the oil from the original Brad Penn product produces a greater wear on metal materials and surfaces than does the PennGrade 1 oil from D-A Lubricant,” Noal said. “But again, the numbers are so close, they are practically the same.”

Lubricant plays a major role in the wear of an engine, and showing the PennGrade 1 product manufactured by D-A Lubricant is the same as, if not slightly better than, the original Brad Penn product proves to customers the product has not been changed.

The mini-traction machine (MTM) is a bench top, computer-controlled, precision traction measurement instrument that provides traction mapping of lubricants and other fluids.

As stated in a report from PCS Instruments, “It is a flexible general-purpose instrument for measuring the frictional properties of lubricated and unlubricated contacts under a wide range of rolling and sliding conditions. One of the main applications is the fully-automated traction mapping of lubricants under conditions commonly found in internal combustion engines.”

According to CRODA Lubricants on its website, “In its standard configuration, a ball mounted in a holder is brought into contact with a disc in a temperature-controlled pot containing the sample lubricant. The speed of the ball and the disc are controlled independently to give the desired relative motion (rolling contact, sliding contact or a mixed/sliding rolling contact). The MTM is used to determine the friction profile of the specific system, typically recorded in the form of a Stribeck curve for metal-metal contacts.”

All formulations were tested for wear and traction coefficient in the PCS Instruments MTM. Test conditions are listed below in Table 1. 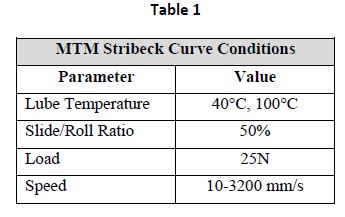 In the graph of Combined Plots, all four samples are labeled together, measuring the traction coefficient versus speed. And in both the graph at 40°C and 100°C, the samples are basically identical. 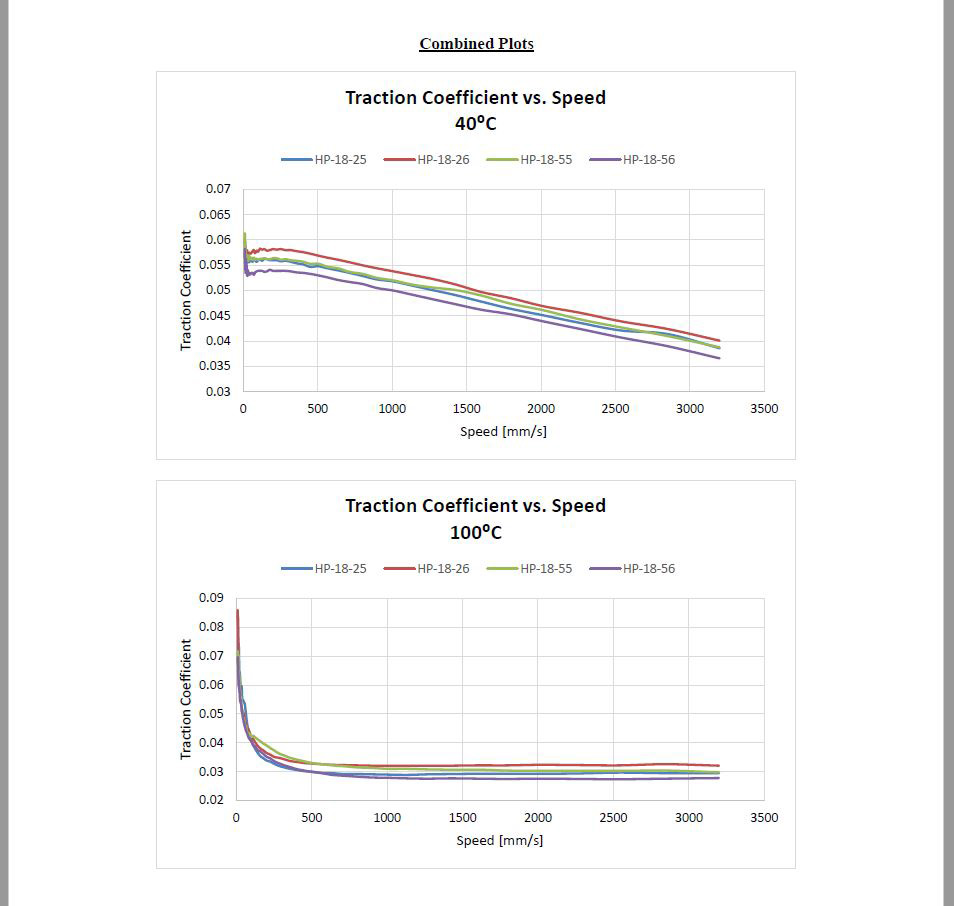 According to ASTM International, “This test method covers the rapid determination of 22 elements in used and unused lubricating oils and base oils, and it provides rapid screening of used oils for indications of wear. Test times approximate a few minutes per test specimen, and detectability for most elements is in the low mg/kg range. In addition, this test method covers a wide variety of metals in virgin and re-refined base oils. Twenty-two elements can be determined rapidly, with test times approximating several minutes per test specimen.”

“This test is a powerful tool to determine exactly what elements are in a lubricant as well as detecting any trace components,” Noal said. “Some of the complaints we got about the PennGrade 1 product were that we had lowered the amount of zinc in the oil and weren’t manufacturing it to the levels we state in our product and safety data sheets. We wanted to make sure to show what is in the oil is exactly what we say is in there.”

“We never dipped below the magic barrier of 1500 parts per million of zinc in our PennGrade 1 oil, like some people thought and complained about,” Noal said. “All along, it’s been the same product.”

D-A Lubricant had a nationally-recognized, independent research and development laboratory perform a series of tests on four different samples of PennGrade 1 Partial Synthetic High-Performance Oil SAE 20W-50. It was the most comprehensive wear testing of PennGrade 1 ever.

The tests run by the laboratory were as follows:

The results from all four tests prove the PennGrade 1 SAE 20W-50 High-Performance Oil is the same product today as the original Brad Penn product was more than 50 years ago — continuing to deliver the same proven performance customers have come to know and trust.

It is the same unique base oil cut and the specially selected high-zinc, high-phosphorus formulation that’s been known and trusted by high-performance engine builders and vehicle owners for decades.

“D-A Lubricant Company has a long history of quality, both in our products and our service, and our focus to remain ahead of the pack rather than simply keeping pace is paramount to success,” Noal said. “We want to maintain that level of relationship we have had with our customers since we began the company in 1919. We have been around 100 years, and we’ve survived and thrived because our customers trust our specialized products to fill their lubrication needs as equipment design has changed or improved. We put out high-quality materials, and we have no desire to compromise that standard, and we certainly have not compromised those values with PennGrade 1. We will always recognize the importance of keeping our loyal, valued customers not only well-informed but well-supplied with the lubricants they demand.”